In May 2015, a group of 51 Rohingya women and children arrived in the Khao Lak area of Southern Thailand after fleeing ethnic persecution in Burma. Separated from their husbands and fathers, who were sent to detention centres, they were placed in a shelter run by the Thai government. Since that time, FED has been working with the shelter to offer services for the women and children while they await resettlement.

Compared to other Burmese migrants, the Rohingya are in a particularly vulnerable position: in addition to the high levels of poverty in Burma and the human rights abuses they suffer in their native region of Rakhine, most Rohingya people also only speak their local languages. As a result, when they flee to neighbouring countries they cannot even integrate with the other migrants, and certainly not with their hosts.

Soon after their arrival in the shelter, FED arranged to enroll the Rohingya children at the Unified Learning Centre, our elementary school for Burmese migrants. Many of the children had never attended school before and we were excited to offer them the opportunity, however, a number of challenges became clear almost immediately. First of all, because of their lack of education, many of the Rohingya children were at an academic level far below other students of the same age. We were faced with the difficult decision of where to place the students; would it be better to have them in classrooms that matched their skills, or would the embarrassment of working with much younger students negatively affect their ability to learn? More importantly, except for English class all of the courses are taught in Burmese, which most of the children do not speak.

Since the students were most engaged in their English class, and since English skills are very valuable given their uncertain futures, FED has begun teaching special classes to the Rohingya children in the afternoons. In doing so, the children can continue to integrate with the other Burmese students in the mornings and at lunch, while having the opportunity to learn English with their Rohingya peers in a more comfortable environment in the afternoon. We are excited to report that the children are incredibly eager students, and have made great progress since the special classes began in early June.

In addition to offering education, we have recently begun organizing fun social activities. To celebrate the end of Ramadan, we worked with the shelter to coordinate a number of activities for the women and children. Refreshments were brought on the day the fasting ended, and FED donated a new outfit to each child. This week, we took the children on a field trip to the local beach, where they spent the day swimming, playing games, and practicing English.

We hope to continue expanding our programming with the Rohingya, to make their time in Khao Lak a more positive experience, and to equip them with skills that will help them in the future. Our next project will be to offer courses for the women during the day, to teach them skills such as sewing and handicrafts. Our goal is to improve their experience in the shelter by engaging them in activities and also to provide them with abilities that they may eventually use to generate income. As our ambition for the Rohingya project continues to grow, we urge our supporters to consider making a contribution to this worthy cause. An increase in funding will allow us to continue to provide vital services to the Rohingya in Thailand, and as you can see from the pictures, a little can go a long way. Education in Emergency Training started this morning at The One hotel, Surat Thani Province. The training was provided by Save the Children and supported by… Original source: The NationEdited and translated by FED The 12 professions to be opened to foreigners include manual labour, as defined by the Employment Department,… 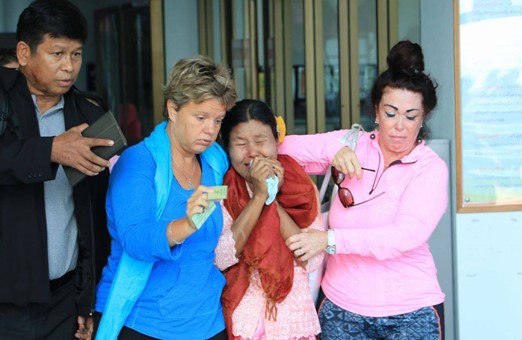 On Thursday the 29th of August 2019, the Supreme Court of Thailand handed down its decision to uphold the death penalties for Zaw Lin and…